My latest "working" project is the UM-XN1 Digital Effects Unit. It uses the Spin Semiconductor's FN-1 DSP chip mounted and sold via Experimental Noize on an end user module. These modules come in 4 variations aimed at guitar effects processors.
My original plan for this unit was a guitar effects unit which emulates the distinct sound that Hank B Marvin from the 60's instrumental group, The Shadows, used with the help of multiple tape echo units. Some enthusiasts had worked their way through various tracks from The Shadows and also researched the tape echo units he used and created a set of patches utilizing the Experimental Noize module to recreate this vintage echo effects. The project for making a guitar effects unit can be found over at Echotapper
I purchased several of each of the different effects sets that Experimental Noize sells with the aim to also make effects modules for my analogue synthesizer setup. So in reality this first unit is a generic unit that uses line level signals whereas the guitar unit described above has a guitar preamp built into the effects unit.
The quality of the effects are quite high considering the affordability of the modules. They offer flanging, chorus, tremelo, stereo delays and echo, reverb. In reality the list is endless once you start to experiment with writing your own DSP code and uploading to the chip. Yes you can actually make your own effects. I became quite excited about this idea.
So the modules that Experimental Noize sell can essentially be plug into audio and power as they are though they do need controls added. These modules have connections for three potentiometers and also for a BCD switch which allows the selection of 8 programs. Connections to these modules are via a 16 pin connector which is aimed at being attached to another printed circuit board as I have done. 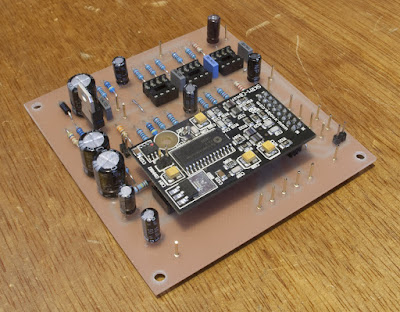 The Experimental Noize module is the small daughter board containing the multi-pin chip. This chip is the FV-1 produced by Spin Semiconductor. Have a good look around their site to see what you can do with this chip along with a forum with very useful information and new patches for the chip. I've also added some audio buffering as described in the documentation which comes with the EN modules. The board also contains a dc regulator circuit which supplies the needed 0-4.5-9v supply. I'm using a 12v dc plugpack.
The UM-XN1 has stereo input and stereo outputs. One of the small issues with the preprogrammed modules is that some are mono in and out and others are mono in and stereo out. These limitations are not the hardware but the programs that are loaded into these modules. They are aimed at mono applications like guitar amplifiers. It was due to this that I put in a switch on my unit which allows for the stereo input to be summed to a mono signal so that the effects processor gets all the input signal.
My design contains an Input and Output Level controls along with a Dry and Wet signal level controls. As I was planning on experimenting with effects that users on the forum had created, there was no promise that some of them wouldn't be stereo. Although once I learn how I am sure I can modify the code to make all effects work in a stereo image. 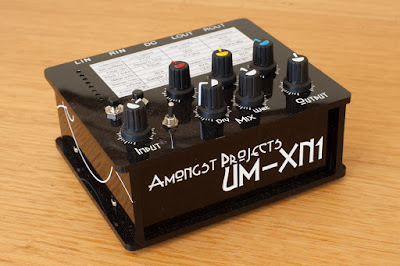 I had to make a decision on how to control the BCD switch arrangement. The module has 3 inputs for the switch connector which allows for the selection of 8 programs. These switch inputs are a binary representation of the program number. I found several circuits that would allow a standard wafer switch to control these programs but I decided that I wanted an interface where I could have leds showing which program is currently selected. I decided on using an Arduino Nano to read the two momentary push buttons which are Program Up and Down. It also lights 8 leds which are arranged next to the program name and parameter list and of course it outputs the binary code to control the effects module. The program name and parameter list on this unit is an adhesive print which allows me to change the patches and reprint a label.
The Echotapper project(s) detail a unit which takes another step further whereby an Arduino is used to control the parameter values as well allowing for a recallable patch system with LCD display. This is also my plan for further units.
I am very happy with the results of this first unit. The photo of the board above looks quite neat although there were a couple of mistakes on my schematic and I also added the Dry and Wet mix controls after I had made this design.

The case is something that I start with the UM-SLM unit. It is a good design for minimising the use of nuts and bolts with your custom designed and CNC routed cases. Due to the placement of these case bolts there is bolts intruding inside the case. The sides and top are glued together the clever design on the two sides hold the nuts in places for the four base bolts. It can be a little fiddly putting the case back together as the nuts are not held in place when the bolt is not connected. So you have to be careful not to let the last one you tighten to fall inside the case. I could possibly work out a way of stopping this but it isn't really a problem.


I think this unit may end up being the one that has the Hank B Marvin effects loaded onto it and I attach it via the effects loop on my Vox AC30. 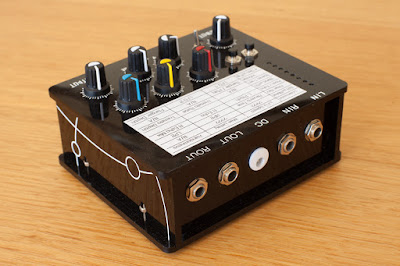