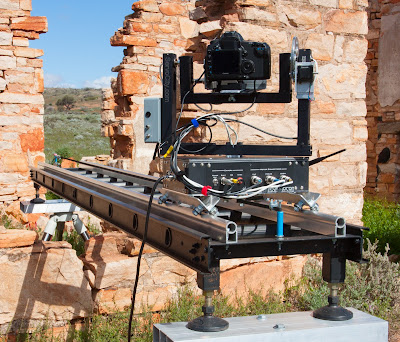 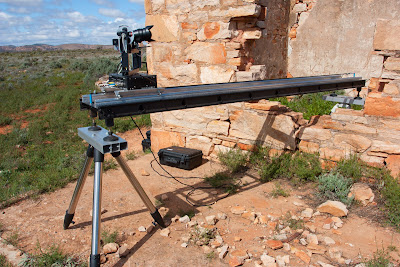 The UM11-MOCON is probably the be all and end all for me. The initial map for this unit is to have a key frame based time-lapse and real time motion control computer.
The track of this unit is a modified aluminium ladder with a two thick aluminium tubes mounted for tracks. There are four heavy duty screw feet at the ends for leveling the track in the field. As you can see from the photos, I've also made up a couple of platforms that allow me to mount the whole assembly on two heavy duty telescope tripods. A sensible person would have placed a tripod under the pan/tilt head but I had to do it the hard way.
The unit contains several stepper motors. The permanent ones are the Track, Pan and Tilt. There are two addition motors which can be used for Zoom, Focus or Aperture. All these motors have separate controllers in the form of Leadshine DM422C microstepper controllers. The permanent motor are hardwired whereas the other motors attach via 5 pin plugs.
The dolly propels itself on the tracks via a cam belt which is threaded through a gear on the track motor and attached at each end of the track assembly. The trucks of the dolly are 90 degree aluminium with four bearings on each. This makes for a reasonable stable arrangement. The Pan/Tilt assembly is a modified ServoCity 785 Series Pan/Tilt  head. The ServoCity unit is controlled via servo motors. I have replaced these with small stepper motors and also put in larger gears to aid in greater accuracy and power. Having the stepper controllers running at 3200 steps per revolution and a 200:11 gear ratio makes for great accuracy. As far as torque, I have no problem moving my Canon 5D mk2 on the pan/tilt with a large lens and two lens motors.
One consideration with the gearing was to use geared stepper motors but I found the backlash on these to be unacceptable. The meshing of the gears that I managed is very good with no backlash. Though the whole unit does have wobble relating to the movement of motors. When doing realtime and previews of shots you can get a resonant wobble. The limitations of this unit. Some people have suggested that placing the track motor at the end of the assembly and using a loop cambelt would be a more stable approach.
The Processor inside the unit is a ChipKit Mega32 which was chosen for it's large SRAM and hi speed processor for doing axis calculations. At the time there was no Arduino equivalent whereas now there is. The whole unit runs off a 24vdc supply as this is the minimum requirement for the stepper controllers. I've used a small buck converter to generate power for the camera. The current of a fully running system clearly varies but it can be up to 800mA with all motors and camera running.
There is an external power outlet on the dolly which is currently used to power the Video Transmitter for getting pictures from the lens to the operator or when a shot is running, a lens warmer is sometimes used for night time shots.