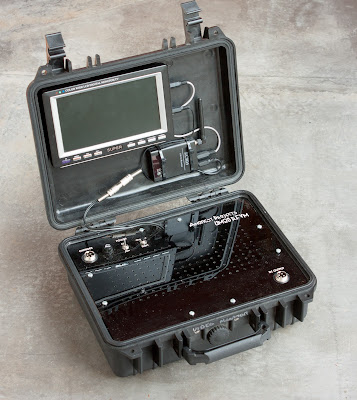 This is my Video Monitor for monitoring the video output of my Canon 5D mk2 DSLR.
It's a cheap LCD display which has an old style composite video input. This was originally inside the UM12 motion control controller unit. Things changed when I realised I couldn't power the controller and the video display / rf receiver combo on the 2.2Ah 12v battery within the one unit for long enough. So I decided to split them as separate units.
So the video monitor and rf receiver now live in a case the same size as the UM12 hand controller. This has the added advantage of having space for it's own 9Ah 12v battery which is amble power for this unit plus it can also supply power for lighting units when not being used or any other 12v needs.
The insides are quite simple. I have put in one of the 555 timer based battery protection units which simply monitors the voltage and when a threshold has been hit the relay kicks out, turning off the power.
I've also recently purchased a monitor light box which limits the amount of light hitting this cheap monitors screen.